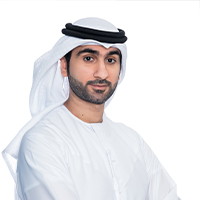 Saeed Al Maeeni is a seasoned professional in Information Technology with more than 18 years of
experience. Saeed is currently the Vice President – Information Technology at Tabreed, Abu Dhabi,
UAE. Saeed brings wealth of techno-functional experience to his current role, with substantial
expertise in Information Technology Management, IT Strategy and Governance, Information
Security, Corporate services, and Applications.
Prior to joining Tabreed, Saeed was Director, Information Technology at Emirates Defense Industries
(EDIC), where he led a team that consists of more than 100 IT Professionals to consolidate and
centralize the IT Functions of 16 entities. In this role he optimized the IT Infrastructure and
established the group Information Technology Policy, procedures, and governance. A unique IT
shared services model was formed under his leadership at EDIC with high standard SLAs KPIs, and
chargeback model. In addition to his roles & responsibilities, Saeed was appointed as acting CEO for
C4 Advanced Solutions for two years. During the transition of EDIC to its newly formed holding
Company “EDGE Group”, Saeed played an instrumental role to launch a similar concept for EDGE
group with a wider scale. In addition, when the Digital Transformation project was initiated, Saeed
played a key role in leading the project and determining the scope.
Prior to that, Saeed was the IT Manager at Abu Dhabi Ship Building where he was given the
responsibility to build a state-of-the-art IT Infrastructure. Saeed worked at Abu Dhabi Food Control
Authority as Senior Officer – Systems and Procedures and at National Bank of Abu Dhabi as System
Administrator.
Saeed holds a Bachelor’s degree in Computing – Information Systems Management from Swinburne
University of Technology, Melbourne, Australia and an Executive Master’s degree in Business
Administration from Zayed University, UAE.